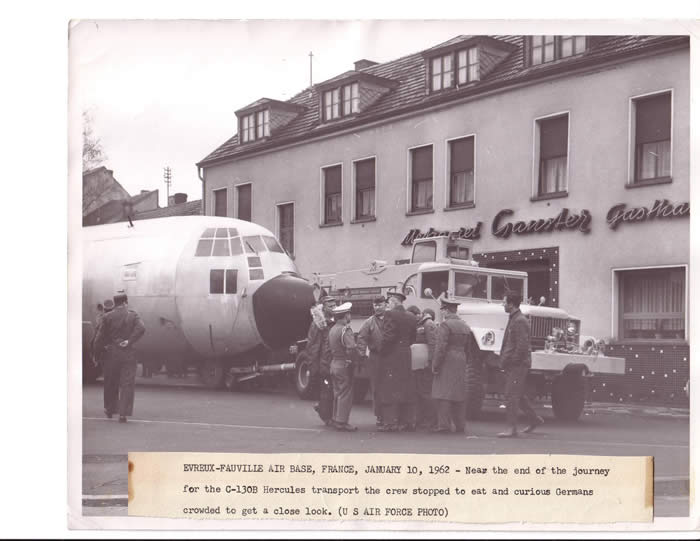 Below is a copy of the Evreux Fauville Air Base Newspaper describing the tow from France to Germany.

The only C-130 Hercules trans-ported ever to taxi down the Champs Elysee in Paris and past the towering Arch of Triumph arrived safely last week at its des-tination, Spangdahlem AB, Ger-many, after a 600-mile journey from Evreux AB, France.

At 1:15 in the morning, sleepy-eyed Parisians were jolted awake by an unbelievable sight, a wingless Air Force transport creeping through the grand bou-levards of Paris.

Towed by a bright yellow wrecker from Evreux and follow-ed by an army of newspaper photographers, the 161/2 foot-wide and 61-foot-long hull crept nonchalantly past the Arch of Triumph and down the city’s boulevard of lights, the Champs Elysee.

The wingless, tailess C-130 will be “reincarnated” at Spangdahl-em, using the “remains” of two other fatally damaged Hercules.

Capt. Arthur E. Hempen and TSgt. Ralph Slayback, who hearded the eight man “flight” crew, said the jaunt through France’s capital city was the easiest leg of the mission.

Dubbed “The Thing” by crew members, it was towed through

heavy traffic, under threatingly low bridges and over mountains, and through small village streets thronged with curious on-lookers.

The accident free journey did have its moments. In Bonneville, just east of Pacy, a shopkeeper watched distrustfully when the monstrous nose section passed dangerously close to an advertising sign that proclaims the shop’s business.

And there were frustrations.  In the demanding task of clearing the highway of traffic and keeping a cautious lookout, the convoy went down the wrong highway shortly before St. Germain.

The unnoticed detour was dis-covered when the 15-foot 9-inch high craft came to a 15-foot 8-inch high bridge.

SSgt. Calvin Sweigart, driver of the wrecker, worked diligently for an hour to free the plane from the

embarrasing position: stuck under the bridge.

Luckily the “lost highway” was the one above the low bridge. To get to it, Sergeant Sweigart drove the big wrecker and the bulky C-130 up an embankment.

When all was rolling smoothly again, the generator in the Air Force escort truck driven by Sergeant Slayback failed. During the remainder of the trip, the convoy stopped 15 times to recharge the truck’s battery.

The next day the convoy rolled into eastern France, where it encountered another low bridge. The gendarmes told Captain Hempen that the shortest detour would add 60 miles to the plann-ed route. “I was ready to deflate The Thing’s tires to get it under that bridge,” says Captain Hem-pen.

The gendarmes went scouting for another road about 11:30 a.m. When they came back, the scouts had found a railroad crossing nearby to return to the planned route.

Arriving at the railroad cross-ing, the convoy came to a halt and waited for two hours for a clearance from railroad officials to cross the busy tracks.

Fifteen miles and three hours later, the towering hull approach-ed an unmanned department state. Local police refused to grant the convoy a clearance to use the roads in their department.

After a long discussion, the national gendarmes escorting the convoy reached an agreement with the local police to allow the plane to pass through the depart-ment at midnight.

Other than disrupting the time schedule, the 61/2 –hour delay left the convoy far out in the country, so far that there were no service stations.

At this point the national gen-darmes said “au revoir” and the French Army took control of the convoy.

At midnight, the convoy began rolling quietly through sleeping villages, passing closed gasoline stations. But the situation was in hand, as Captain Hempen had phoned the U.S. Army at Vatry and asked to borrow some gaso-line. The Army said it would give the convoy the gasoline and serve hot meals to the men, including the French Army escorts.

At 2 a.m. the convoy approach-ed Chalon, a city not on the planned route. The caravan had made a wrong turn, missing the highway that passed Vatry and the Army post, with its gasoline and hot meals.

To keep rolling until daylight, the French Army escorts loaned 200 liters of gasoline to the crew.

Captain Hempen and Sergeant Slayback agreed that it was an unusually hard trip, “It was bitter cold and the men were in the warm trucks one minute and out in the freezing weather the next,” says Captain Hempen.

Describing the convoy from an unknowing villager’s view point, Captain Hempen said, “The French Army vehicles with flashing lights would enter a small village, attracting much attention. Following the French, an Air Force pick-up truck, headlights on, would arrive. By this time people were stopping along the streets.”

“The villagers then saw a big yellow Air Force wrecker, and following closely behind it came The Thing, dwarfing everything in its path.”

Sergeant Slayback tells about a shopkeeper who walked casually out of his shop, looked to his left and saw an aircraft coming down the street of his little village. He jumped backwards and reached for the wall of his building to gain support.

One of the most tense moments was in Metz, where the plane was towed for two or three miles under high tension wires used by city trolly cars.

When The Thing stopped for a few minutes in a city, it was surrounded with hundreds of children. “Although the men were exhausted, they still had the spirit to entertain the youngsters,” says Captain Hempen. When the crew opened the aircraft door, the children swarmed into the cargo compartment.

According to crew members the most-heard comment from onlookers was “You’ll never make it.” In fact, Capt. Harry Orange, material control officer, bet Cap-tain Hempen a party in the officer’s club that the plane would never make it in four days.

Scheduled to arrive at Spang-dahlem AB at 6 p.m., the convoy went through the base’s main gate at 5:35 p.m., 25 minutes ahead of schedule. Captain Oran-ge gave the party last Saturday night.

Captain Hempen said, “We maintained the schedule because the men were determined to do it and because of the excellent


cooperation of the French and Germans.”

“I think I am speaking for the men when I say we wouldn’t want the job again, but we wouldn’t have missed this one for any-thing,” Captain Hempen said.

The crewmen were: SSGT. Cal-vin Sweigart, driver of the

tail components and mid section of two other damaged Hercules. The C-130 from Evreux burned last November when a fuel pump exploded, but firemen were able to save the front section, which houses the costly radio, electrical navigation system, and the flight controls.